Jesus’ life in the Sea of Galilee

For three years Jesus spent his time in the region from Nazareth to the north of the Sea of Galilee, preaching to audience and to Jews in synagogues, along with performing miracles acts. He succeeded in creating a large base of faithful disciples and a respectable Christian community.

Prior to his recognition in the region, Jesus performed a miracle of changing water into wine at a wedding banquet in Kfar Cana. “What Jesus did here in Cana of Galilee was the first of the signs through which he revealed his glory; and his disciples believed in him" (John 2:11, NIV).

According to Christian tradition and the New Testament, Mount Nahum that is also known as Mount Beatitudes is the place where Jesus delivered the "Sermon on the Mount". That was the place Jesus preached to the multitude that assembled to see and hear him, and the place where he healed the people in need.

The Tabha cove is the area where Jesus performed the famous miracle known as the “five loaves and the two fish”, to the audience that came to listen to his preaching. Despite the remote area and lack of food, Jesus miraculously prepared a meal for the 5000 people attended with the help of 5 loaves bread and two fish, and left 12 baskets of spare food. The byzantine church of the Multiplication of the loaves and fish is found in the area, along with the church of St. Peter’s Primacy where Jesus is said to have appeared to his disciples after the resurrection.

Fishing has been a big part of the local community’s everyday life in the Galilee. The type of boat that found in the Galilee region in 1986 is a living proof of the boats mentioned used by Jesus, his disciples and the fishermen.

Holyland Sailing offers an opportunity for pilgrims on board to take part in history by sailing on a wooden boat that has been replicated exactly as the two thousand year old boat that was discovered in 1986. This great discovery is one of the region’s latest greatest remnants of the first centuries BCE – CE.

The boat was discovered by two brothers – Moshe and Yuval Lufan, due to a severe drought which resulted in a low sea level. In a joint effort of the Israel Antiquities Authorities and volunteers, the boat was gruelingly excavated for eleven days. Finally, the boat was taken out of the Sea and carefully carried to the Yigal Alon heritage center for extensive conservation work until the year 2000, when it was finally presented to the public.

The Yigal Alon center reveals the amazing story of the boat discovery and the long preservation process it had to go through in order to “bring it back to life” and to make it look as up to date as possible. Many historians and professional renovators undertook upon themselves the task of rebuilding the boat according to the data provided in the gospels with respect size, length and use.

The boat is twenty seven feet long and seven feet wide, the shallow bottom well suited to ply the waters of the lake.  Whether or not Jesus was in this particular boat remains a mystery, but it does match the type of boat Jesus and his disciples would have used to fish and preach from on the waters of Galilee. It is the oldest original maritime vessel on display in any museum in the world. 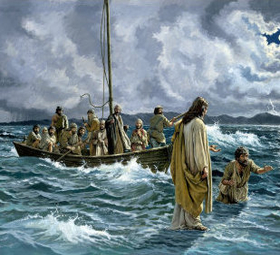 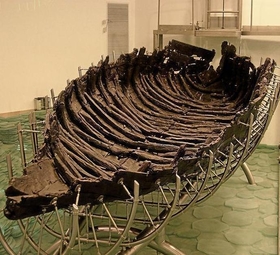 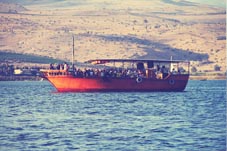 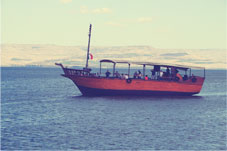